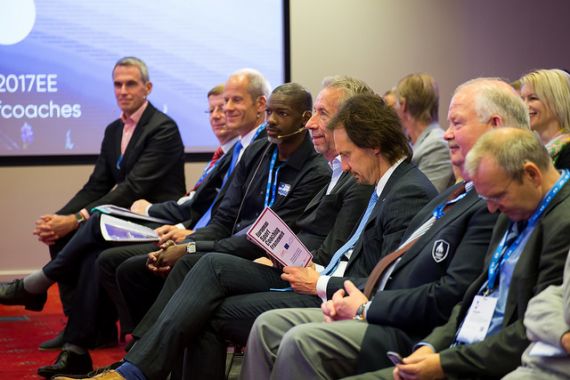 Research conducted by Leeds Beckett and ICCE researchers Sergio Lara-Bercial, Dr Julian North, Dr A.J. Rankin-Wright and Dr Ladislav Petrovic was showcased at the inaugural Sport Conference of the Estonian Presidency of the European Council focused on ‘The Role of Coaches in Society’ which took place in Tallinn from 12-14th July.

Estonia, a country renown for producing great sporting talent from a very small pool (1.5M inhabitants) is holding the Presidency of the European Council from July to December 2017. In the area of sport, the priority chosen by the Estonian minister of Culture, Mr Indrek Saar is the recognition and adequate preparation of the sport coach. Estonia has recently adopted a sport act which regulates the coaching profession and has created a qualifications systems and coaching register to support coaches’ development.

The focus of the conference was on the changing role of the coach in 21st century society. Minister Saar said: ‘the social role of coaches is even greater than their sport-specific role by teaching values and skills for life’. A similar message was shared by Deputy Director General of the European Commission Mr Jens Nymand-Christensen who also emphasise the role of coach education to guarantee positive sporting experiences for all European citizens. Mr Nymand-Christensen stressed the role that Project CoachLearn led by Leeds Beckett and the International Council for Coaching Excellence and the publication of its main output, the European Sport Coaching Framework (ESCF) has in ‘showing the way for those developing coaching and coaching systems’.

Leeds Beckett partner, the ICCE was given a place of honour at the conference as the global body leading and supporting the development of coaching world-wide. ICCE and Carnegie School of Sport Senior Research Fellow Sergio Lara-Bercial delivered two keynotes. On the first one he spoke exclusively to the Meeting of Sport Director Generals of the 28 EU Member Countries about the changing role of coaches in 21st century society. Sergio introduced them to the ESCF and underlined the need to provide coaches with the right knowledge, skills and attitudes to fulfil the ever more complex role of the coach and the needs of the 100 million European citizens receiving coaching from 9 million coaches across the Union. In his second keynote, Sergio discussed his research into Olympic Serial Winning Coaches with Allar Raja, Estonian Bronze medallist in Rio.

In addition, José Curado, European Coaching Council President, presented a keynote lecture on the importance of balancing formal, non-formal and informal education in the development of coaches and encouraged all to ‘Never stop walking on the road to Utopia’. Likewise, ICCE Board Member Kirsi Hämäläinen, took part in a panel analysing the skills needed of coaches in the 21st Century.

The conference marked a historic moment for coaching in Europe and further developments and collaborations between the Estonian Presidency, the European Commission, the ICCE and Leeds Beckett are expected.

Disclaimer: The European Commission support for the production of this publication does not constitute an endorsement of the contents which reflect the views only of the authors, and the Commission cannot be held responsible for any use which may be made of the information contained therein.
© 2018 ICCE